Paid by the Minute 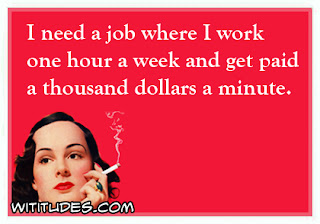 It started with fast food workers demanding higher wages. Now all workers across the nation have galvanized to win a $15 an hour minimum wage. In 2012, 200 fast food workers walked off the job to demand $15 hourly wages and union rights. What began as a fast food workers plight has become a global movement! Thanks to Fightfor15.org, now more than one in five workers is covered by $15 minimum wage.  Twenty-two million workers have won $68 million in raises.

The federal minimum wage is set at $7.25 an hour and has remained the same since 2009. According to the Associated Press, twenty states have minimum wage increases taking effect in 2019. Twenty-Nine states and the District of Columbia have set minimum wages above the federal level since 2009.

It is great to see that workers are getting an increase in their minimum hourly wage. But when you think about it, nowadays everything is tracked and pinpointed. Your location can be pinpointed and be off by just a few yards, if even that. Time also can be tracked by the millisecond, or even less than that. What then, if you work an extra 2 minutes at work? Shouldn’t you get paid for those extra two minutes?

California courts say yes! California Supreme Court departs from the doctrine of federal wage-and-hour de minimus doctrine that excuses the payment of wages for very small amounts of time that are irregular and administratively difficult for the employees to track. But nowadays time need not be difficult to track at all. According to the California Supreme Court, if the time can be captured, then it can and must be paid. This means that if you stay at work for an extra 2 minutes, then you must be paid for those extra two minutes!

But wait a minute!

There is one unexpected, small, minor, shall I say, minute problem with this ruling. This pay-by-the-minute ruling suggests that now your time at work cannot be rounded up. Rounding up of time is common and it is permissible under federal law. But if we are tracking by the minute, essentially tracking by the second, then rounding up seems to be de minimis.

Rounding up of your time at work becomes negligible and unnecessary. Think about it, for a minute or two and you will see that it makes sense. Or on second thought, if you live in California, use those extra few minutes instead and get back to work…. Because you get paid by the minute!

Email ThisBlogThis!Share to TwitterShare to FacebookShare to Pinterest
Labels: humor, in the news