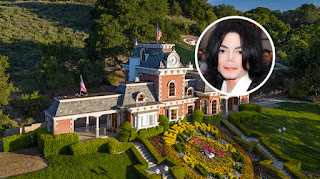 5. The first problem with the sale of Jackson's Neverland Ranch is that the area where Neverland Ranch is located known as Los Olivos, California, has been devastated by wildfires, mudslides, and drought. People are not purchasing property in that area.  And most certainly, people are not buying distraught property at such an inflated price point.


4. The next problem with the sale of Jackson's Neverland Ranch is that the high-end luxury real estate market is depreciated and taking a hit at this present time. People are simply not buying million-dollar homes like they used to. According to Coldwell Banker’s 2019 State of Luxury report, there was a moderation in the pace of luxury home sales in 2018 due to several factors, including increasing inventory levels, elevated pricing, and—to a lesser degree—rising interest rates.

2. Another obstacle to signing a buyer for the Neverland Ranch, which the new property managers have certainly considered, is that Michael Jackson's property will forever be known as Neverland Ranch. The new agents must have taken this into consideration because it was rebranded with a new name: The Sycamore Valley Ranch. As if by changing the name anyone can forget that this is the world-famous Neverland Ranch!

1. And the number one reason why Neverland Ranch will probably never be sold is because The Neverland Ranch is known for 2700 acres, a 12,000 square foot 5 bedroom house, a few guest houses, a lagoon-style swimming pool, an amusement park with a ferris wheel, roller coaster, carousel, bumper cars, and an arcade, two train locomotives, a fire department with a 1950s fire truck, a 50 seat movie theatre,  and world famous menagerie with exotic pets that Michael Jackson owned such as an elephants, orangutans, and llamas.

One would think that all these amenities would warrant the sale tag price of $31 million. But see, Neverland Ranch, where Michael Jackson resided for about 15 years, is being sold without the amusement park, nor menagerie of exotic pets. The Neverland Ranch, or as they call it now, the Sycamore Valley Ranch, is also being offered for sale without any of Michael Jackson's personal affects. Without these things, NeverLand may never be sold.