First the police fail her when they can't locate her father's killer. Then after she herself finds the killer and pointed him out to the authorities who pick him up and charge him, then the judge fails her, ruling that the killer's due process rights were violated because it took them over 25 years to find him, in violation of his speedy trial rights.

Wait.  But there is no statute of limitations for murder, right? NO there isn't.  So what happened here?

Let's start from the beginning of this needs-to-be-made-into-a-movie story. Let's go back to the eighties in Washington Heights, New York. The neighborhood was plagued with violence, crime, and drugs. Joselyn Martinez' father was
working at his restaurant that fateful night when a teenager made lewd comments to a waitress. Joselyn's father walked over to defend the woman and throw the teen out of his establishment.  That should have been the end of that.  But this teen was armed.  A fight ensued and Joselyn's father was killed.


Joselyn was about 8 years old. 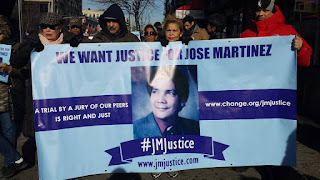 
When he arrives in Florida, he applies for citizenship under false pretenses.  Again, I'm guessing he thought he got away with murder so he can get away with falsifying government documents.  So he became a US citizen, and lived a normal life in Florida, holding down a job and supporting his new family. 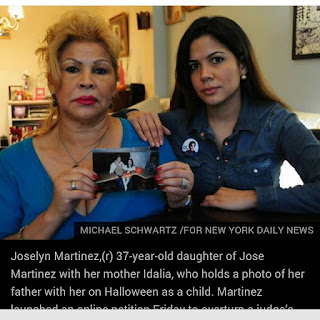 That's so nice and dandy because Joselyn Martinez' family is incomplete.  Joselyn's soul is incomplete.  That emptiness burned a relentless desire to find her father's killer.  Joselyn's search did not cease. Until one day, in the midst of yet another tiredless, late night internet search matrix --- there he was!  Joselyn finds  a man that appears to be her father's killer living in Florida.  Can it be?   She alerts authorities.  The police go pick him up from Florida and bring him to New York and charge him with murder.

This is 25 years later or so, actually almost 30 years later.  Joselyn, and her mother, attend the hearings for the murder trial, prayful that justice will finally be realized.  However, in a peculiar turn of events, the judge threw out the case saying, the police made no efforts to find him and according to a 1978 ruling, the police have a duty to make "diligent efforts".  Never mind that the perpetrator was in another country! Case was dismissed.

But the authorities didn't fail Joselyn Martinez this time! The feds pick him up in Florida once again, this time for immigration fraud.  Joselyn gets word of the trial and she and her mom hop a flight to Miami, to the United States District Court.

Joselyn was there to hear the verdict: GUILTY.  Justo Santos stands to do 10 years for immigration fraud when he is sentenced later this year.

After such a long journey -30 years- justice for Joselyn has been served.  Her facebook friends flood her timeline with joy.  Joselyn sums up the 30 year journey in one post on her facebook timeline - just one sentence: