They're No Different Than YOU! 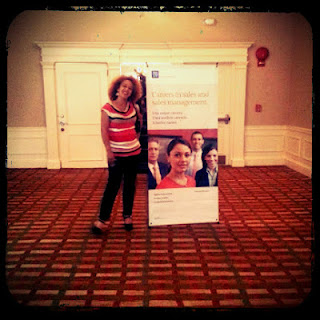 As a speaker was our very own Torres, who highlighted the story about how she became a lawyer.  It was because her Mom worked at an office in the Human Resources Department and used to come home and say to her:

You know... I see all these young people that just graduated from college and they get these jobs making good money... and they're no different than YOU!

So of course straight to college she went.  While at college, her mother changed jobs and worked at a large law firm and her mother used to come home and say:

You know... I see all these young attorneys and they make good money and you know... they're no different than YOU!

Well, she wasn't so sure how to even become a lawyer but if "they're no different than YOU" then there has to be a way!  And so the way was a test called the LSAT.  and the rest is history!  Now Torres has her own law office and her mother takes care of her kids while she is at the law office.

So one day, she went to pick up her daughter at her Mom's and her daughter ran up to her and said:  Mami, Mami!  The kids in school say that I look just like Michelle Obama!

Really?  Well, Torres didn't know how to respond but her mother did!  She peered out from the kitchen and responded:

Well, you know, that Michelle Obama.... she's no different than YOU! :)