The PRBA 56th Annual Gala was a great success! 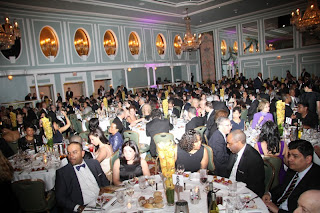 There was great food, drinking and dancing!

Well, did you know that GOYA is
Some trivia, see if you can answer...

Where, in what city, was the small storefront this family opened?

In 1936, Don Prudencio Unanue and his wife Carolina, immigrants who  first migrated  to  Puerto  Rico  from  Spain,  started  Goya in  a  small storefront on Duane Street in Lower Manhattan.   Driven by the belief that there was a growing consumer market for high‐quality, fresh‐tasting, Latin foods, the Unanues catered  to  local  Hispanic  families  by  distributing  authentic  Spanish  products including olives, olive oil and sardines.

As  the  Hispanic  population  grew  in  New  York  and  throughout  the United  States,
Goya’s  product  line  and  facilities  expanded  as  well.    The  company  relocated  from
Lower Manhattan to Brooklyn in 1958, until it established its current headquarters
in Secaucus, New Jersey in 1974.

Goya now boasts over 15 facilities throughout the United  States,  Puerto  Rico,  Dominican  Republic  and  Spain,  employs  3,500 worldwide,  and  produces  and  distributes  over  2,200  products  including condiments,  pantry  items,  beverages,  canned  and  frozen,  as  well  as  a  vast assortment of low sodium, gluten‐free, organic, and kosher foods.